COVID-19 Update: We Are Open For Business More info


Standing nearly 260 feet high, with a base comprised of more than 250 cubic yards of concrete reinforced with over 58,000 lbs. of steel[1], wind turbines of this size have become common fixtures throughout the United States. In 2017, wind energy produced over 254 billion kilowatt-hours (kWh) or about 6% of the total U.S. electricity generation and accounted for approximately 37% of the total energy produced by renewable sources.[2]

With tens of thousands of wind turbines now operating in the U.S., the maintenance teams for wind farm operators are tasked with keeping this critical infrastructure running to avoid power service disruptions for customers. One such wind farm operator that has one of the largest wind turbine installed bases in the U.S. approached H&N Wind with a problem they were experiencing in the generators found in several of their wind turbines. The copper wye rings that serve as the internal three-phase connections that link the coil groups together in the rotors, were cracked and causing wind turbine generator shutdowns.

Members of the H&N team worked with the customer to identify the root cause of the cracking and how to detect it prior to catastrophic failure. They assessed that the damage to the wye rings was most likely caused by the repeated expansion and contraction of the ring at a weak point which eventually lead to the copper wye rings cracking and separating. The broken ring then led to an electrical short which was continuously shutting down the generators. Without repairing the problem, the electrical arcing from repeated restart attempts could have led to catastrophic damage to the wind turbine generators, requiring their removal and replacement.

With extensive experience and being one of the early pioneers in developing wye ring repair techniques to address these types of failures, the H&N team was able to offer the customer a total solution upgrade versus a simple repair that could significantly extend the service life of the wind turbine generators. The H&N team finished the project by doing complete up-tower disassemblies and installing specially manufactured, new wye rings into the generators along with new brushes and brush holders, and upgraded bearings.

H&N was asked by their customer to partner with them on a preventative maintenance plan where the wind service team bore scoped multiple generators in the customer’s wind turbine fleet to identify those units that had wye ring damage and needed the same up-tower repair. After the borescopes were completed, it was evident that the majority of the wye rings needed to be replaced and a plan was put into place to preventatively replace the damaged wye rings across their fleet. H&N Wind had potentially saved the customer millions of dollars by preventing the need to take generators out of service that were trending towards failure and that could have required a much more costly down-tower repair in a traditional shop environment. 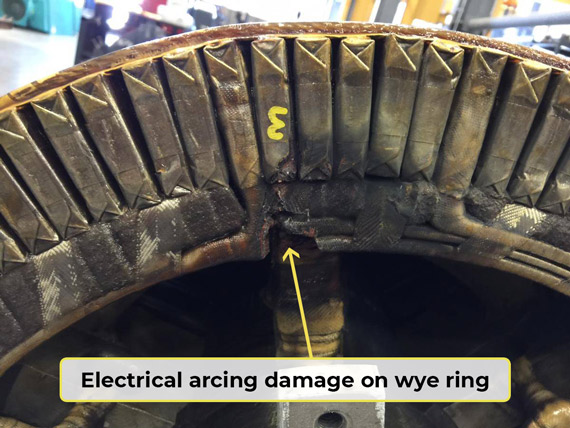